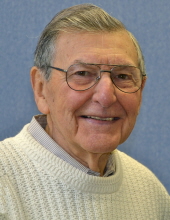 Fran found his professional calling in the post-war manufactured housing industry. His intuitive understanding of modular construction and ability to optimize assembly line techniques led to a succession of management roles with National Homes Corp. and other major housing manufacturers in the 50s and 60s. In 1969, he joined Marshall Erdman and Associates as the head of manufacturing, responsible for the growing Waunakee facilities for MEA and Techline, retiring as VP Manufacturing in 1987.
Fran was a member of West Middleton Lutheran Church, where he served on the church council. He became active in the Fraternal Order of Freemasonry, achieving 32nd degree, and serving as Grand Master of the Verona lodge. Fran loved the outdoors and enjoyed country living in the home he and Ethel built in 1984. He was an avid golfer and participated in several weekly men’s and couples leagues. He loved gardening, and greatly enjoyed hunting and fishing with his family and friends. Early retirement allowed Fran and Ethel opportunities to travel extensively, including winter golfing vacations to the southwest, trips to Alaska, Germany and Austria, Spain, Mexico, and Ireland. Together they enjoyed hiking to the bottom of the Grand Canyon and back as well as many family skiing and fly-fishing trips to Montana. Francis is survived by his wife, Ethel; sons, Douglas Furry and Darryl Furry; daughter, Kim (Eddie) Roberson; grandchildren, Callie Furry, Tanner Furry, Sean Roberson, Lucas Roberson, Noah Roberson and Rachel Roberson; great-grandchild, Jameson Roberson; his sister Karen; and dear friends. He was preceded in death by his parents; sisters, Selma and Joan; and brothers, John and Hubert.
on May 10, 2020