After spending close to four decades developing affordable housing in the Bay Area at Eden Housing and Bridge Housing before striking out on his own, Rick Holliday was eyeing a transition into a side venture in 2017 when he received a request he could hardly refuse. 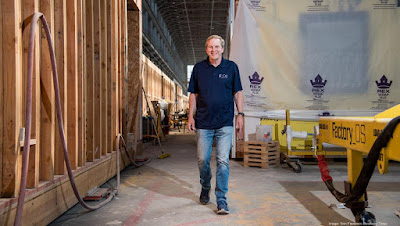 Google was looking for a way to house its workforce in pricey Silicon Valley, and it wanted to order 300 modular homes.

That ended up as the springboard for Holliday and the side venture, Factory OS, which he had started with business partner James Pace. The company, which operates out of a former Mare Island Naval Shipyard machine shop known as Building 680, designs and builds homes using prefabricated and modular components.

Where submarines were once assembled during World War II, Holliday and his crew are now pre-building homes year round that are shipped to building sites across the Bay Area. Shaking up the construction industry’s 100-year-old practice of building everything on site can make the process a lot faster and a lot cheaper.