This is not the first time construction unions have fought with developers using modular construction and I'm sure it won't be the last. 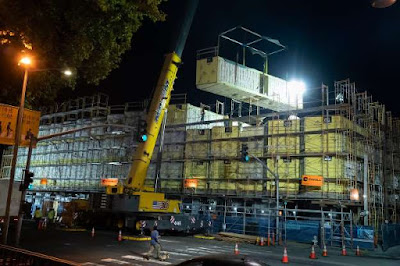 The 143-unit modular supportive housing project under construction on Bryant Street in San Francisco has drawn praise for the speed at which it is being built and its low construction cost.

Over a two-week period earlier this month, the boxes that make up the building were trucked over the Bay Bridge from Factory OS on Mare Island in Vallejo late at night and set on the concrete foundation at 833 Bryant St. Once completed it will be the city’s first 100% affordable modular project, an assembly-line-built project that will cost $385,000 per unit. That compares with about $525,000 a unit for a conventional “stick-built” development.

San Francisco building trades leaders argue that modular construction lowers construction standards and pushes down wages saying they are against modular housing unless it is built in San Francisco with union workers and craft-specific employees.