Let’s make one thing perfectly clear. No modular home factory employee or modular home builder would ever purposely build problems into houses. Everybody in the modular housing industry wakes up every morning wanting every single module leaving the factory to be perfect.

But there are factors that change the perfectly conceived and built module from being just that - perfect.
Here are 3 areas where that perfect house can take a left turn into the problem area.
Total Miscommunication
This is probably the biggest problem facing our industry today. It starts with a prospective new home buyer wanting everything they see on Pinterest and other websites. Cost isn’t even a factor at this point as the builder knows the factory will take every item and price it for them. That couldn’t possibly take the factory’s purchasing department more than a day to get all the costs, talk to production to find out how much labor is needed and then take it to the Sales Manager for pricing. It’s not like they have much to do anyway.

Next up is the builder that has been used to getting waited on hand and foot for years and now that business is getting better and with fewer factories to choose from is finding their requests put in the queue instead of being pushed to the front of the line. After a couple of days, the builder is angry and wants answers today! If only the factory was more transparent about what is taking so long instead of telling the builder “we’re working on it and you will have it later today”.
The modular factory is not above miscommunicating what is needed to complete the production process on each module. Modules get scheduled for production knowing that certain custom items will not arrive on time simply to keep a builder happy. When the item arrives, the production people have to be told the item needs installed in the module now setting in the yard. But what happens if receiving forgets to tell someone the special item has arrived and it sets on the shelf for a week?
Set Crews and crane operators left without any modules to set simply because nobody from the factory called and told the builder there would be a one day delay or better yet, the factory’s dispatcher calls the builder’s office the evening before and leaves a voice message the builder doesn’t get until the next morning.
Entire books could be written about miscommunication in the modular housing industry.
Too Much Customization
In certain regions of the country, especially along the eastern seaboard states, custom modular homes not only rule the day but factories are attempting to meet every demand their builder and the builder’s customer want.

Production tract builders can produce a lot of homes quickly simply because they have a limited number of floor plans, exterior designs and options all of which were carefully researched and priced long before the first shovel of dirt was moved in one of their communities.
Years ago most modular factories gave all their builders Plan Books and deviating from those plans was discouraged. Options for length and sometimes widths were allowed but only in predetermined lengths and widths. Homes were box like and many plan books would show a picture on one ranch style home with 20 different floor plans. Oh, if only life were that simple again.
I remember a house where the customer wanted a special order urinal for her twin boys in a shared bathroom. The builder didn’t care because the factory would buy it and install it. The purchasing department found the one the customer wanted at a specialty warehouse. The cost was a little over $150. If it was returned, the warehouse had a 30% restocking charge and return shipping was extra. That put the real cost of the urinal over $220. Then the fellow in charge of plumbing noticed that it needed a special trap and connection which added another $100. The the wall had to have extra support and tile had to be added as a surround. Long story short; the $150 special order urinal ended up costing the customer over $500 with the factory only making its normal profit.
I doubt very much if that amount of effort would be put into finding its real cost today as most items tend to be custom and there simply isn’t enough time to take each item and calculate true costs.
Set Crew Performance
When the module is handed over from the crane operator to the set crew any number of problems can and often do arise. 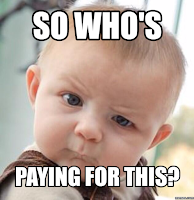 If the modules don’t fit the set crew has to make it fit. The builder is probably standing near the customer who wants to know if this will cause any problems. The builder puts everything on the set crew’s shoulders.
When the set crew makes a mistake or heaven forbid, doesn't show up, what happens with the modules setting on the carriers and who pays the crane operator? Good question.
The set crew boss looks at the 4 dormers that were added to the house AFTER they quoted the job and wants paid to install them. The builder tells them he paid the factory for the set and they need to collect from them. “And that Your Honor, is when I hit the builder.”
If a set crew quotes a job based on what the builder has specified the job almost always goes smoothly. When a builder tries to take shortcuts with the set and pushes for the set crew to do work that wasn’t in the contract, one side is not going to be happy.
When the set is delayed because of (pick one:) bad weather, no modules have arrived, late start because the crane has arrived late or not at all, the access road is too narrow to get the modules in or the house is being built on an endangered insect’s breeding ground; who is responsible for paying the set crew that may have driven hundreds of miles to set the house and now has to stay another day?
There are a myriad of problems facing all new home builders both site and off-site. The ones above are very common in modular home construction and sometimes all three scenarios can happen on the same job.
on December 08, 2020