What Happens When Demand for Modular Construction Outstrips Supply?

Off-Site commercial and residential construction is red hot today. Hotels, new homes, dormitories, affordable housing and homeless shelters are in high demand by builders and developers. But what happens when demand for modular outstrips supply? 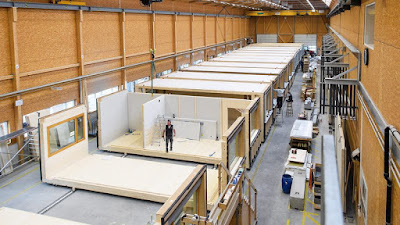 To learn the answer, let's start with a look outside the US where modular factories are sprouting like mushrooms in England, Europe, Asia and even Canada. News of modular construction can be found everywhere and the public's perception of modular is very positive.

The US modular industry, both commercial and residential, however, do a very poor job of marketing. No national campaigns by any factory. The reason for this is modular is regional but marketing today is instantly national thanks to the Internet. Many factories don’t even answer email requests for information if it’s outside their delivery area.

Today there is a huge demand for single-family modular homes, especially on the East Coast where custom is the norm. But the same factories that build these time-consuming custom homes are also scheduling large multi-module commercial jobs into their factory.

The average US factory can only build 8-15 modules a week but there are a couple that can build more than that. Many are faced with having to make tough decisions about taking on a major commercial project which could tie up their single production line for 6-8 weeks and push back residential orders 2 months or turn down the commercial and hope their single-family production will keep the factory running at full steam.

Or do they simply build the commercial work only during the off-peak months of Winter? Oh, to be a fly on the wall of Board Meetings!

Capacity doesn’t seem to be as much of a problem in other parts of the world. Because the British government is actively promoting modular, Hull, England north of London on the North Sea has become a huge hub for modular production and continues growing.

In the US we have seen a couple of new modular factories open in the West but not much activity to build a new factory on the East Coast. It seems several of the newest modular factories are designed exclusively for large projects including affordable housing, build to rent and developers building strictly their own projects.

I know of two proposed modular factories that began as an idea to build single-family residential housing but quickly realized the low hanging fruit was the project side of the business where they didn’t have to establish a builder network. Instead, they only have to work with a couple of developers.

And finally, let’s look at how codes and regulations impact modular production in the US. Many states in the US have very “easy to meet codes” for building houses. They follow older IRC models and local and state housing regulations that are well written and enforced fairly.

Many other states like the ones on the East and West Coasts and a few of the Northern Central states make getting a modular home through the preproduction review process so hard that many modular home builders have a picture of the head of their state’s Housing Agency on the wall and use it for a dartboard.

If a state has vetted a third party inspection service to review and provide the “stamp” for a modular plan prior to production, why then do those plans need to be completely reviewed again at the state level by understaffed and overworked plan reviewers?

This has been known to add months to some plan reviews.

Then the plan goes to the local code enforcement department where some inspectors don’t know the difference between a modular home and a manufactured home and neither do the people in the towns and neighborhoods where the homeowner wants to build their new home. Witness the many planning commission meetings where people protest a modular home coming into their neighborhood and waving signs with “Not in my Neighborhood”

I have personally been the subject of one of those meetings and it’s not fun.

So what happens when the media promotes modular construction to the point of popular acceptance, driving demand higher and higher and there are no plans to run more shifts and few new factories are in the planning stages? It can’t all be blamed on a labor shortage.