We've all heard of modular affordable housing, modular hotels and even modular ADUs but it wasn't until recently that I learned of modular farming. This already has a proven track record but this company is about to go bigger. 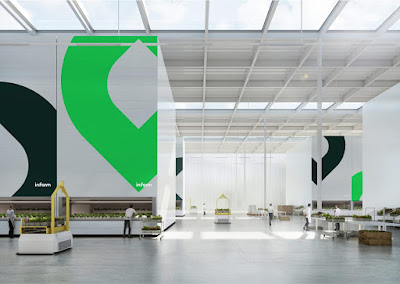 InFarm, a company best known for bringing modular hydroponic farming units to grocery stores, today introduced its Growing Center facility, a combination high-capacity farm and distribution center. The company plans to build out 100 of these facilities by 2025 in major cities all over the world, with the total amounting to 1.5 million square meters of farmland.

Berlin, Germany-based InFarm already operates a network of smaller, cloud-connected hydroponic farms across the world. These modular units are typically found in the produce section of major grocery retailers, from Marks & Spencer in the UK to Kroger in the U.S. to Aldi in Germany. The pod-like farms are modular, meaning they can vary in size depending on location. And because the leafy greens inside the farms are grown on-site, the buying public gets access to more freshly harvested produce that hasn’t traveled the length of a country to reach store shelves. 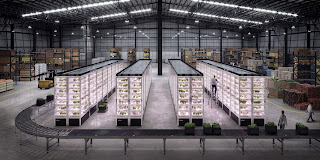 With its Growing Center initiative, InFarm is essentially scaling up the modular-farm concept. Dozens of InFarm’s modular units, each between 10 and 18 meters (about 33 to 59 feet) high, make up one Growing Center. InFarm says these facilities take six weeks to build and will be able to generate “the crop-equivalent of 10,000 m2 of farmland.”

InFarm’s existing units in grocery stores are all cloud controlled, so that environmental elements like CO2 levels, farm temperature, light and pH levels, and plant growth cycles can be set, monitored, and managed remotely across the entire network. In other words, if one combination of those elements works for, say, basil, that “recipe” can be replicated across the entire network.

Growing Centers will plug into this network, so that the entirety of InFarm’s units are connected to “a central farming brain,” according to the company’s Chief Technology Officer Guy Galonska. “We’ve collected more than 300 billion data points throughout our farming network to date. These data enable us to perfect our growing recipes and improve yield, quality and nutritional value, while reducing the production price constantly,” he said in today’s press release.

While plenty of smaller vertical farms exist nowadays, much of the attention of late has been on larger, commercial-scale facilities that produce pounds of leafy greens that number in the millions. Last year, AeroFarms, Kalera, Plenty, BrightFarms, Nordic Harvest, and many others saw both major funding and significant expansion. Driving a lot of this activity is that commercial-scale farms can produce more delicate types of produce (e.g., leafy greens) closer to consumers, eliminating the need for lengthy shipping times that can damage plants.

All of these companies promise produce grown more efficiently, with less water and energy required than would be with traditional farming. However, at this point, most data is siloed within each company, so it’s difficult to find a truly universal, objective point of view when it comes to efficiency and energy savings. That doesn’t however, mean the numbers are all a smokescreen. In fact, of all the things the controlled ag sector did in 2020, proving itself as an important and viable part of the future farming system was the most important. While the role of this method will constantly evolve, its presence will remain a given for the foreseeable future.

For its part, Infarm says its Growing Centers will be located “in major urban centers.” So far, 15 are either planned or under construction across, London, Paris, Copenhagen, Tokyo, Vancouver, Seattle, and Toronto. InFarm has not said which of these facilities will open first.