Austin's Tiny Home Village About to Triple in Size

Austin, TX, like a lot of cities, has problems finding shelter for their growing homeless population but a non-profit has stepped up to meet that challenge head-on. 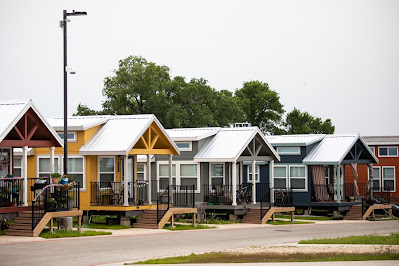 The nonprofit that runs Austin's Community First Village has acquired land and plans to build out more tiny homes to house Austinites transitioning out of homelessness.

At an announcement Wednesday, MLF's founder Alan Graham said the nonprofit secured 127 additional acres for two new sites — one that will expand the current site off Hog Eye Road and another that will host a new village off Burleson Road in Southeast Austin. All told, the expansion, which is set to begin construction next summer, would more than triple the footprint of Community First — from 51 acres to 178.

The announcement comes ahead of a citywide vote over Austin's policies surrounding homelessness and as state leaders at the Capitol attempt to target the city's 2019 decision to largely stop penalizing people for behavior related to homelessness.

Opponents of that decision say it's led to public health and safety crises and a boom in public tent encampments. Proponents say it's helped divert Austinites living outdoors from tickets that make it harder to transition out of homelessness.