Over the past 5 years, the modular housing industry has seen quite a few changes. No longer are there just "modular home factories" and "commercial modular factories." Today those have blended into modular factories doing both. Soon they may be adding Tiny Houses to their product line. 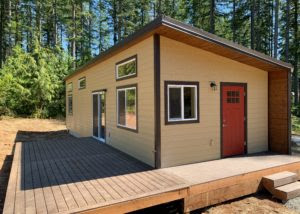 We have seen the arrival of new modern modular factories dedicated to supplying projects for the affordable housing market, the "build to rent" developers, and commercial retail modular factories building Chic-fil-As, Starbucks, and even convenience stores. Some of those new factories have been built by developers to serve their own needs.

While all this was happening the Auxiliary Dwelling Unit modular market began to open serving areas where they meet zoning requirements.

But the market that will soon be taken away from the 'Mom and Pop' factory owners is the Tiny House market.

Cities across the US and the World are looking at Tiny Houses to fill the need for both housing the homeless and for the lower end of the affordable housing market. City governments are opening entire villages of Tiny Homes using non-profits as the catalyst.

Soon, however, the housing regulatory agencies will begin wanting them brought into health and safety compliance and that's where the modular housing industry will step in. Instead of independent unregulated factories building just about anything they want with minimal building standards, the code regulators will begin requiring cities, non-profits, and even tiny house 'build to rent' developers to build to at least the Tiny Home requirements of the IRC.

Third-party inspections will be required. Fast-moving production lines using robotics and automation will be needed to fill the unbelievable demand of these small homes. Instead of a factory building 30 or 40 unregulated tiny homes a year, these new and even the existing modular factories will be turning out 30-40 tiny homes a week.

Sign Up to receive the Modcoach News newsletter twice a week

I'm not one for wild predictions but all it will take for the OSHA and the states stepping in requiring all tiny houses to be built to a national code is a fire in one of those unregulated tiny houses villages built from storage sheds to wipe out the entire village. Hopefully without a lose of life.