A Unique Comparison of Modular Construction to the Auto Industry

Efficiency in the auto industry is well known and experts in the off-site construction industry have tried for years to adapt those same labor saving methods to the modular housing industry. 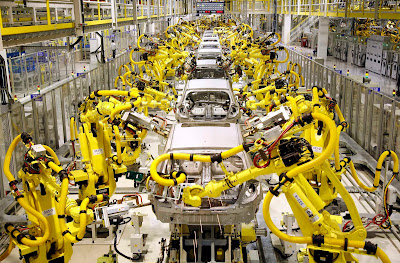 Someone sent me this video about how the auto industry could be the way to build new homes on the modular production line. I watched it and saw several areas where all that wonderful automation shares some of the same major choke points as modular production.

Watching the frame of the car being assembled by robots was fascinating and well orchestrated. I could have watched that for quite a while and not got tired of it. However, and there are always "howevers" in life and modular production, every single frame was identical with the robots attaching the parts in exactly the same way every time before the welding process began.

Unfortunately, that is about the only part of the modular process that can be completely automated and some modular factories are already doing it, mostly in the cookie cutter world of multifamily and commercial production.

If it were only that simple on the residential and custom modular production line where just about every wall is different with a myriad of different nailing points. Yes, automation might save a little time and labor at that point but once the wall panels are completed and ready to be assembled into a 6 sided volumetric box, automation begins to become so difficult to accomplish that we may never see it become a reality.

For the BMW factory in the video, just about every other process requires human interaction. There are certainly robotic arms being used to help humans place sections within the car but it is still humans doing the final work.

One of my favorite parts was watching the robotic arms placing the seats inside the car. That was quite good. The main reason they were used however was that it allows just about anyone to use the arm to set the seat in place although it is all human controlled. 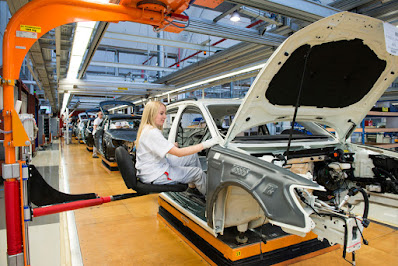 Another part of the video shows workers being seated and the robotic arm is used to carry them inside the car to manually finish the interiors. Now that would be something a lot of the people on the modular production line might like!

For the modular factory, having those manually controlled arms help load product into and onto the house, would be a major improvement. Just ask the people installing shingles if the would like to be able to control an arm holding a pallet of shingles instead of having to walk the length of the roof to get shingles.

The auto industry really has put automation into the assembly line process but it is only effective if hundreds of the same car are built. It would be less effective for both the robots and the human labor to build every single car to different specs. The modular industry does that all the time.

Now watch the video from a modular factory's viewpoint and ask yourself what procedures and automation would work for our industry and which may take decades to make inroads. I'll bet those manually controlled arms will be on a lot of factory owners Wish Lists after watching how BMW builds cars.